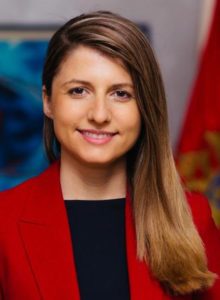 With over 15+ years of experience in government reform, policy and digital transformation leadership Tamara has developed a global reputation for introducing the culture, practices and technologies of the digital era to help governments better serve the public. She currently serves as the Minister of Public Administration, Digital Society and Media of Montenegro.

Tamara is passionate about empowering leaders in government, and driving culture change by introducing mindset, practices and modern digital delivery skills, building teams highly skilled in human centered design, iterative product delivery and empathetic group facilitation. She has built two startups for the state of California, recruited and cultivated world-class technology talent, and developed critical partnerships that changed how the government delivers services to public. In 2017 she founded Office of Innovation at California at California Health and Human Services that was responsible for driving innovation for 13 state departments of 30,000 employees with an annual budget of roughly $160 billion, providing critical healthcare and social services to nearly one-third of all California residents. Creation of this office validated an impetus to scale capacity to drive innovation for the entire state government. Tamara was a part of the core team that worked on establishing a permanent innovation agency at the GovOps level – Office of Digital Innovation – that focuses on improving the usefulness, reliability, and user experience of California’s most important digital services.

Tamara has consulted on civic tech, tech policy, public administration reform and digital transformation with leaders around the world and spearheaded digital service/innovation communities of practice, workshops and trainings in California, Western Balkan and European countries.

Tamara lived, studied and worked on 3 continents and is fluent in Montenegrin, English and French. She received her undergraduate degree at California State University, a tri continent international MBA at Temple University, École Nationale des Ponts et Chaussées (which took place in Paris, Tokyo, Shanghai, Beijing) and a masters with Temple University, Philadelphia.

The transformation of Montenegro starts with the people

Over the past two California administrations Tamara championed the course for the priority policy initiatives and digital service and public transformation strategies for the world’s 5th largest economy. And in December 2020 a newly elected Prime Minister in Montenegro asked her to join his cabinet as the Minister of Public Administration, Digital Society and Media.