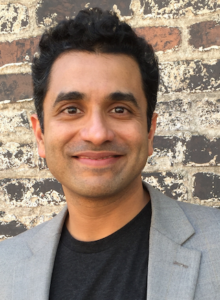 Nikhil J. Deshpande is Chief Digital Officer for the state of Georgia. He heads the Office of Digital Services (DSGa) under the Georgia Technology Authority.

Nikhil strongly advocated and set the framework for the use of social media for Georgia, back when using social media for government was not common. He established a presence for the state on Facebook, LinkedIn, and Twitter to quickly address citizens’ questions and concerns.

Prior to his career in digital government, Nikhil worked in advertising and digital media.

Nikhil has two master’s degrees in Visual Communications and Interaction Design from the Indian Institute of Technology, Bombay (IITB) and the Savannah College of Art and Design (SCAD). He served as adjunct faculty at the Atlanta campus of SCAD for 10 years, where he taught graduate classes in Interaction Design and User Experience.

Nikhil has won several national and international awards and recognition for his work in digital government. He was recently honored with Atlanta’s 40 under 40, an award recognizing 40 accomplished individuals under the age of 40.

Digital Service Units around the world are harnessing the power of human-centered design and agile development to build the products and services that communities need and want. But how can governments move beyond effective product delivery, toward advancing the digital maturity of their organization as a whole? How should governments leverage capacity building and culture change to sustain their... read more