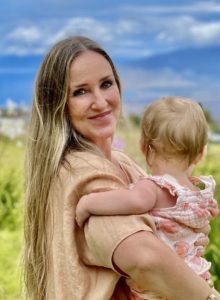 Danielle’s globally award-winning work spans the fields of design, technology, film, and social impact. For over 20 years she has brought vibrant humanity and creativity to Nike, Apple, and Google. She lectures at Stanford and is an inspiring, sought-after speaker who has been invited to address audiences at Sundance, Wisdom 2.0, Forbes, O’Reilly, MIT, Harvard, Semipermanent, and SXSW. Her work has been featured in TIME, VICE, The New York Times, New York Magazine, NBC, and ABC.

Danielle Krettek Cobb, Founder of Google Empathy Lab is a radical force of hope and heart in technology. Join us for this visionary talk where Danielle shares lessons and inspirations, widening our aperture to imagine a future where the most advanced technologies and models of intelligence are informed by deep human and planetary wisdom. It’s a journey from inner work to outer space, from... read more