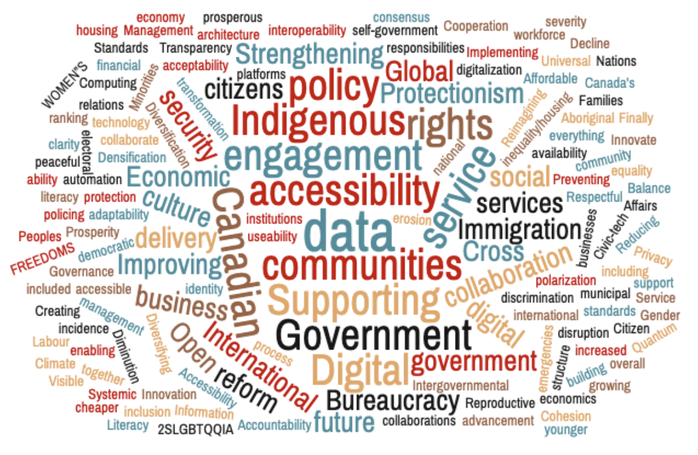 Each year, we survey FWD50 participants to find out what they’re interested in learning, where their challenges are, and what technologies and policies hold the most promise in the coming months.

We use this data to shape the content we run, the speakers we invite, and the questions on our Call for Proposals (CFP). You can check out the 2017 and 2018 results if you want to see how things have evolved.

We also try to be a bit provocative—asking people to take sides on a nuanced subject, or proposing a false dichotomy. While this helps us get a better understanding of extreme optimism or concern, some respondents called us out on it: One respondent complained, “some of your questions were loaded with assumptions with no room to correct the assumptions made.” Fair point; we’re still learning.

We had a few hundred responses to our survey. So here’s a quick look at the results, starting with some background on who responded.

The vast majority of respondents worked for the Federal Government—but not necessarily the Canadian government. We had responses from a dozen countries. In addition, one in five respondents was from the private sector.

We asked respondents which of several options best described their job:

We got responses from around the world—a reflection of the global reach FWD50 has added in the past couple of years—but just over half of respondents were based in Ottawa. 8% of them had completed a local college; roughly 50% had an undergraduate degree; and an impressive 36.1% had a postgraduate eduction (Masters, Ph.D, etc.)

What policies are most important?

Technology is so pervasive, it shapes every aspect of policy. We asked respondents to rate the relative importance of each policy area listed below from “unimportant” to “critically important.”

When we break these responses down by demographic data, the results are instructive. For example, the higher a respondents’ level of education, the more likely they are to think that dealing with climate change is critically important:

Similarly, technical respondents who work in data science and systems engineering are less concerned about ensuring digital rights & privacy than policymakers or the program managers who actually have to implement and defend technology.

We also asked an open-ended question about what topics we missed. Accessibility, Indigenous Services, Rights and Freedoms, Immigration, and a general interest in the impact of globalism and foreign policy on Canadian government came up a lot. Here’s a tag cloud of those topics (even though tag clouds aren’t very good to work with, statistically.)

It’s worth pointing out that in the past two years, we’ve run several sessions on indigenous digital government, inclusion, and accessibility. In surveys, respondents often rate these topics as important, but when they “vote with their feet” actual interest is significantly lower, making these some of the least-attended sessions in the conference.

Clearly we need to figure out how to better get these topics the attention they deserve.

We asked respondents to complete a sentence in one of two ways, with the two options being extreme positions. By analyzing the responses, we can understand the relative sentiment around various policy initiatives.

How much should government regulate tech?

First, we asked about technology regulation. Should government regulate technology to ensure compliance, accessibility, and proper use—or would a free-for-all approach of more experimentation and less control be better?

Respondents were mixed on this question, but indicated there might be a bit too much regulation in government tech.

Is tech transformation getting enough funding?

Technology transformation is a major task for nearly every government department. But is it receiving the funding needed?

Respondents felt fairly strongly that such initiatives are under-funded.

Inclusion and accessibility in projects

One of the discussions that came up at FWD50 2018 was the tradeoff between fast, experimental delivery—in which the first edition of something might not have all the features of a final product—and ensuring that the product was usable by everyone even if it delays the iteration and learning that comes from rapid iteration.

Another key issue was the balance between public- and private-sector innovation. Proponents of public-built tools worry about vendor lock-in and proprietary systems where tech licenses become a “tax” on government operations; proponents of private-sector solutions point to costly overruns and delays in visible government projects.

Ultimately, respondents felt there should be a balance of the two—a suggesting that this is a great topic for further discussion at this year’s event. But we decided to dig a bit deeper and look at differences in responses by members of the public sector (academics, governments, and NGOs) versus those from members of the private sector (vendors and consultants,) since they have competing horses in this race.

What technologies are important?

We live in a time of tremendous digital upheaval. With so many technologies from which to choose, which should government focus on? We asked respondents to rate how important various technologies will be to technology transformation.

We’ve sorted the responses in this list by relative importance rating. AI, cloud computing, digital process management, and open data are very important; sensors, automation, and blockchain seem to be less so.

This is much more than prioritizing new features — many of these technologies have significant policy implications. AI may bring bias to decision-making; sensors can invade privacy; automation can eliminate jobs. Focusing on the right things is critical not just to government services, but to building the kind of society we want.

What’s holding us back?

We asked respondents what was preventing them from making the most of digital transformation. They cited permission to take risks and lack of training, as well as reliance on incumbent vendors and old technology, as the main culprits.

We dug into the responses by public/private sector here too, to see if answers differed significantly across the two groups. They agree on the funding of technology transformation—both think it’s lacking, but a few government and NGO respondents think it’s over-funded.

Public versus private sector on distraction by the latest tech

When it comes to trying the “shiny new things” on offer, private-sector respondents deem it more of a problem than their public-sector counterparts.

This suggests a frustration on the part of vendors that governments favour emerging technologies while neglecting basic block-and-tackle digital improvement.

We run a wide range of formats at FWD50, from workshops and keynotes to panels and interactive sessions like Circlesquare.

Surprisingly, workshops were not considered as useful as keynote talks in this question, despite many respondents suggesting additional interaction and hands-on sessions focused on solving actual problems in other responses.

We asked people to tell us what other formats they’d like to see in the event. Here’s a partial list (though most people left this field blank) ranked by popularity.

We asked respondents to name their dream speaker.

We asked respondents what else we should think about. Paraphrasing, here are some of the more important or common answers:

One person asked if we could set up a volunteer program—but didn’t leave their email address (we made the form anonymous; hopefully they’ll see this!) The good news is we have one: Dozens of volunteers help us put on the event each year in return for a pass. You can go to the contact form on our website and select “I’d like to volunteer” from the form:

Surveys are an imprecise art, but they’re a good way to get a general sense of how a group is thinking. Thanks to the hundreds of people who spent time completing this survey, we learned a lot. You’ve helped shape this year’s conference more than you know. We’ve reached out to many of the respondents who asked us to contact them directly about a particular response.

We’ve locked in roughly half of our speakers for the November 2019 event. Having analyzed the survey responses, we’re opening up our 2019 Call for Proposals, so you can suggest a topic you’d like to cover or a speaker you know who would be good on stage. The CFP will be open for a couple of months, so get your suggestions in before the summer break. We’ll be announcing the preliminary schedule and initial lineup in the summer.